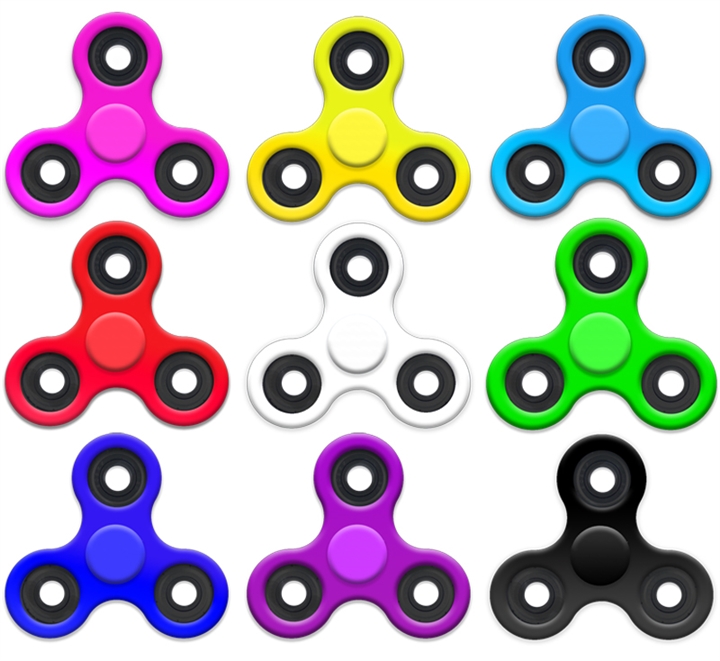 At a recent library event, a frantic eighth grader rushed up to me and asked if we could make an announcement because his spinner was missing. To which I said, “Your what?”

It’s becoming a challenge to keep up with the latest in the world of fidgets.

At the beginning of the school year, slime was all the rage. Slime is like DIY silly puddy, a gooey blob that you can squeeze and pull apart and push back together again. While it’s still well loved, the obsession with making it and having it on you at all time has died down. Fine by me, because some of the homemade slime that got brought into the library was not congealing quite as well as it was meant to.

Next, it was stress balls. Kids would fill balloons with flour or a similar substance. Once, I did a program where we made stress balls with non-Newtonian fluid inside, so it turned hard if pressure was applied. The kids were jazzed, if baffled, by the changing textures. The downside of these stress balls is that, well, balloons can pop. Luckily, at my library, kids happened to be outside both times one burst, spewing a pouf of flour all over; however, the fragility is not a great match for energetic teens who tend to be rough on their belongings, so that trend, too, flared up and died out.

Now, the biggest thing is spinners. Spinners are typically three-pronged wheels with a center circle, sometime decorated with an emoji or a different color. In so far as any fidget has a “purpose,” (as they’re created to be open-ended) the purpose of the spinner is to, you guessed it, spin. The center hub can be held or balanced on a table while the three prongs wheel around. Some spinners have circular cut outs or inserts on the edge of the three sides, where lights shine while the toy is being spun. Ones that I’ve seen make a low humming noise as they spin and air gets pushed out.

Because, yes, I have finally seen one. Two days after I was first introduced to the term, I had a longer conversation with a different group of eighth graders who showed me their spinners and talked to me about them. I learned that, not only are hugely popular, they can also be pretty pricey. That’s why the boy who lost his at a library program was so worried. Cheaper ones can be found for under $10, but plenty of the spiffier options are above $20.

They also said, at their school, every teacher has a different policy. Most teachers allowed them to have them, albeit begrudgingly, and not during tests. One only allows fidgets of any kind, spinners included, with a doctor’s note for something like ADHD or Autism, which is the primary audience for these toys.

At least, it was initially. As stated in a recent Tribune article on the topic, “The idea behind fidget devices — or what’s sometimes called fidget therapy — is that they enhance the senses to allow for better and longer concentration.” Studies hailed fidgets as a great aide for students who struggle to focus, and some therapists say they’re good for everyone. The problem becomes when they begin being used as a toy, something to distract rather than focus. As will surprise few who work with kids and teens, this digression, from useful to obstructive, happened very quickly, especially in classroom environments. Many schools have issued bans like the one the eighth graders at my library mentioned, where exceptions are only granted to those with doctor’s notes.

It’s not all bad news, and especially not in a library setting, where noises and toys are more permitted. Another cool thing? Some teens are 3D printing spinners at libraries. A colleague even told me that the teens at his library were starting a business selling their 3D printed spinners at discounted rates. You’ve got to admire that entrepreneurial spirit! And that provides a great tie-in between library services and pop culture, which can help entice teens to visit the library and see it as a fun place.

While spinners promise to be less messy than slime or stress balls, I personally struggle to see the appeal compared to other available fidgets. Perhaps I’m too outcome-driven, but having only one way to play with something seems dull to me. I want to be able to do more than spin. That’s me, though. The teens seem to have no problem with it.

What are you seeing in your libraries? Are fidgets a great, fun, and useful toy that libraries can help promote? Or are they a passing fad?