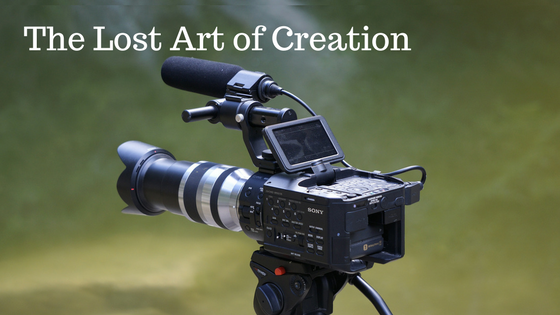 While technology is helpful, it also contributes to people becoming, well, more robotic. Siri can define the word “banausic,” eliminating the need to pull out a dictionary; while Google Maps can help you navigate to the closest ramen bowl spot, eliminating the need to look at an actual map. This series looks at technology that counteracts this trend, tools that help spark conversation, create 3-D designs, and encourage creativity. This month’s post explores YouTube and specifically the combo video/blog known as “vlog.”

Launched in 2005, YouTube is a free video sharing website where users can easily upload videos and subscribe to channels.  Many libraries and library associations have dedicated YouTube Channels and it’s the 3rd most popular media outlet used by digital natives (behind Facebook & Twitter). Some people might dismiss the site as just a repository of silly videos but the site’s wide reach has sparked careers and even business ventures.

Sal Khan, the creator of Khan Academy, got started by posting tutoring videos for his cousins on YouTube.  Discussing the appeal of this tech tool at a recent TED Conference, Khan explains that his cousins preferred watching videos, over face-to-face tutoring sessions. This is a major benefit of YouTube, people watch instructional videos at their own pace and re-visit whenever they need a refresher.

Within the YouTube world there are specific types of videos known as vlogs. Just how popular are video blogs? PewDiePie, a Swedish comedian, has over 56 million subscribers and the teaching vlog AsapScience has over 6 million subscribers. The content isn’t important, vlogs are simply video productions with a host (or hosts) that might incorporate music, animation, or memes. Video blogging has been around for at least 10 years. The launch of YouTube, combined with the increased use of social media and smartphones created the perfect atmosphere for vlogs to thrive.

Skeptical about vlogs, its popularity or ability to be an effective marketing tool? So was I. Most of the YouTube library vlogs I found feature trips to the library or studying at the library as part of a personal video blog, rather than a series published by a library.  That being said, some major organizations use vlogs.

The American Library Association (ALA) has a vlog series and a major reason they started the series is that they love watching YouTube videos. ALA also recognizes the potential for connecting with members by answering questions, promoting ALA initiatives, and introducing staff members. Other practical uses can be found on David Lee King’s list of vlogging ideas for libraries.

How can you get started vlogging? Similar to considering a blog or podcast the first step is to decide on a focus and audience. A major factor that separates vlogs from other social media is that the host needs to be comfortable talking in front of the camera to an imaginary audience.  If you want to explore vlogging, below are some things to consider:

I am very excited to announce the next series, which will star tech librarians. Have you ever looked at a job title and wondered how the person got there? I virtually interviewed librarians working in academic, public, and special libraries to learn more about their journey. Stay tuned to hear from Digital Services, Library Systems, and Innovation Librarians from all over the U.S.