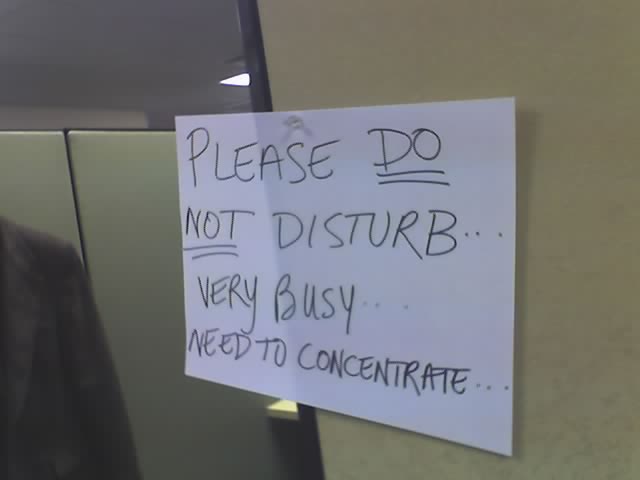 There are many ways to avoid distractions. The first line of defense is self-control. That works most of the time but not always. Here are some techniques and software suggestions for avoiding distractions.

END_OF_DOCUMENT_TOKEN_TO_BE_REPLACED

That image is the insanity that is my Outlook calendar. There’s a lot of stuff going on in it. We’ve talked about hacking Outlook before here at LITA blog, but there’s a ton you can do with Outlook to help organize yourself and become more productive. While Whtini talked about using the calendar to track projects which helps greatly for year-end reviews, monthly reports, and project management, I’ve got a simple ‘hack’ that I learned accidentally that helps me keep on top of all the things I need to do: You can drag emails out of your inbox to your calendar or your to-do list This works slightly differently depending on the version of Office you’re running but in every version you can drag the email to the calendar or to-do list icon in the lower left of you screen and then create a new item from there. For example, let’s say…

END_OF_DOCUMENT_TOKEN_TO_BE_REPLACED

Using a simple text editor can improve your workflow and help you keep track of your work. Windows users have access to Notepad which works great for distraction-free writing.

END_OF_DOCUMENT_TOKEN_TO_BE_REPLACED

Beginning in August 2016, the Special Libraries Association (SLA) discontinued its traditional discussion-based listserv in favor of a new service: SLA Connect. If you click through to the post on Information Today, Inc. you can see the host of services and tools and enhancements moving to SLA Connect provides for SLA members. However, change is difficult and this change caught a number of members by surprise. We all know how difficult it is to communicate change to patrons. It’s no easier with fellow professionals. The rollout was going to start July 1, 2016 but got pushed back a month because of member feedback. Since this is technology, of course there were compliant issues with the new server so some services that were scheduled for a slower transition got moved more quickly and old platforms were shut down. The whole enterprise is a complete change to how people were used to communicating with…

END_OF_DOCUMENT_TOKEN_TO_BE_REPLACED

Back in December I read an article about Seattle Public Library’s WiFi HotSpot lending program. At the time of the article they had 325 devices available for checkout and a waiting list of more than 1,000 patrons. The program was started via a grant with Google but at the end of the year SPL needed to find a permanent solution for paying for the program, which they did. Their goal is 775 units in all. You can see in the graphic above SPL has 566 HotSpots (as of July 7, 2016) with 1,211 holds. It’s an ambitious program but given the size of the population they serve it may be too small. The New York Public Library has 10,000 devices in its HotSpot program, but again that’s probably not enough. In fact, according to their website all the devices are out (they’re doing a program where patrons get the HotSpot for up to a full year)….

END_OF_DOCUMENT_TOKEN_TO_BE_REPLACED

We’ve talked in the past about having iPads in the library and how to buy multiple copies of an app at the same time. This is long delayed post about the tool we use at my library to manage the devices. At Waukesha Public Library we use Apple’s Configurator 2. This is a great solution if you have up to forty or fifty devices to manage. Beyond that it gets unwieldy (although I’ll talk about a way you could use the Configurator for more devices). We have two dozen or so iPads we manage this way so it works perfectly for us. You can see in the photo above all our iPads connected to the Configurator. It even gives you an idea of what the desktop of the iPad is; you can even upload your own image to be loaded on each device if you want to brand them for your library. When…

END_OF_DOCUMENT_TOKEN_TO_BE_REPLACED

I joked with a colleague recently that I need to get over my issue with vendors giving me sales pitches during phone calls and meetings. We had a good laugh since a major responsibility of my job as Assistant Director is to meet with vendors and learn about products that will enhance the patron experience at my library. As the point of contact I’m going to be the person the vendor calls and I’m going to be the person to whom the vendor pitches stuff. The point was that sometimes it would be nice to have a quiet day so you could get back to the other vendors who have contacted you or maybe actually implement some of the tech you acquired from a vendor—he says as he looks wistfully at a pile of equipment in his office that should out in the public’s hands. Just last month my fellow blogger Bill…

END_OF_DOCUMENT_TOKEN_TO_BE_REPLACED

This is part 2 in a series of managing iPads in the library. Part 1 (about the physical process of maintaining devices) was posted back in August. Part 3 (how to manage the software aspect of your devices) will come out next month. If you’re going to offer iPad services to your patrons—either as a part of programming/instruction or as items they can check out and take home—you’re going to want some way to get apps in bulk. If you’re only looking at free apps then you’ll want to wait for the next post where I talk about how to get apps onto devices. But if you’re going to use pay apps (which is really what you want to do, right?) then read on. You could set up each iPad individually and add a credit card/gift card to each one and buy apps as you needed them. That might not be…

END_OF_DOCUMENT_TOKEN_TO_BE_REPLACED

Getting Started/Setting Things Up Several years ago we added twenty iPad 2s to use in our children’s and teen programming. They have a variety of apps on them ranging from early literacy and math apps to Garage Band and iMovie to Minecraft and Clash of Clans*. Ten of the iPads are geared towards younger kids and ten are slanted towards teen interests. Not surprisingly, the iPads were very popular when we first acquired them. We treated app selection as an extension of our collection development policy. Both the Children’s and Adult Services departments have a staff iPad they can use to try out apps before adding them to the programming iPads. We bought a cart from Spectrum Industries (a WI-based company; we also have several laptop carts from them) so that we had a place to house and charge the devices. The cart has space for forty iPads/tablets total. We use an…